On the last trip of the season, a whale watching tour on Atlantic Canadian waters was treated to the thrill of a lifetime when a male orca swam directly up to their boat. Grand Manan’s Sea Watch Tours guide Durlan Ingersoll hasn’t layer eyes on the magnificent creatures in 16 years, so he was pleasantly surprised to see the 1.5-meter dorsal fin in the Bay of Fundy. “This is way up there. This is incredibly rare. I think a couple of years ago I had heard there was a lone killer whale off of Nova Scotia somewhere, whether it’s the same one or not I have no idea. This is really satisfying to see this animal, this close too,” he said. “To find this, to get to see this whale in The Bay of Fundy is pretty remarkable”. I’ve never had the privilege to personal encounter the giant apex predator in the wild, the closest I’ve come was in Maui when out jet skiing on our honeymoon, a pod of about 150 spinner dolphins showed up and began riding the bows of our jet skis, the juveniles breaching and spinning. It was quite the experience. 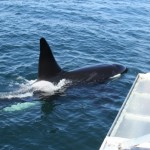