Looking to add an eye-popping saltwater fish that will stop people in their tracks? Let’s take a closer look at the Snowflake Eel and see if it’s a good fit for your aquarium setup.

Scientific and other names

The scientific name for the Snowflake eel is Echidna nebulosa.

I wonder if that factoid will ever come in handy at trivia night?

Not surprisingly, their unusual markings have inspired many different common names including snowflake moray, Bosch’s eel, clouded moray eel, floral eel, starry eel, white and zebra moray eel. So, if you know this creature by one of those other names, please note, I’m writing about the same fish.

Snowflake morays have gone global. They are reef dwellers found in oceans around the globe.  They can be found in the Indo-Pacific to Hawaii as well as off the coast of Africa, Australia, Baja California, and Mexico.

They take up residence in caves and crevices in the reefs, spending most of their time with only their heads visible and their mouths in constant motion to keep water flowing over their gills. 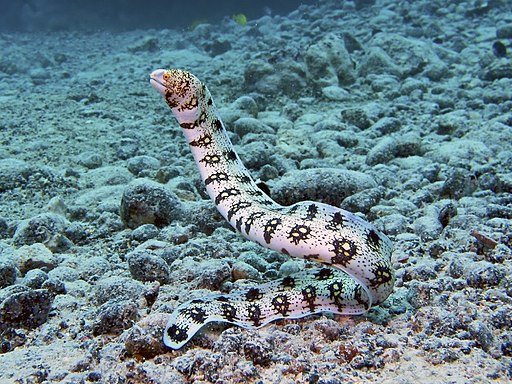 These amazing moray eels grow to be about 3 feet in length, at max size, but despite how it looks in the image above, they aren’t exactly open-water swimmers, but you are probably best to keep them in a ~55-gallon aquarium, or larger.

Just make sure you have a tight-fitting lid, whatever size tank you have.

Out on the reef (which is where I’d rather be right now, how about you?) snowflake eels are ambush predators. They are generally found in rockwork crevices and dart out (with surprising speed), to intercept their preferred prey–reef crustaceans and fish.

If you’re not careful, that might be exactly what your snowflake eel eats in your tank, too.

But that could get expensive.

If you want to observe the natural hunting behavior, you could feed them live ghost shrimp or even live feeder fish. However, I’d caution against that, if you ever hope to keep your eel in a mixed reef tank with anything small enough to fit in its mouth. If you do, you probably want to get it trained to take prepared food as quickly and consistently as possible.

Since most hobbyists prefer that their eels do not eat their prized invertebrates, most are fed a meaty seafood diet (table shrimp, clams, krill, etc.), although they can be trained to take freeze dried foods as well.

One of the most app-eel-ing things about this fish is that they will learn (fairly quickly) to take food by hand…or rather…from stick or tweezers, as can be seen in the video below:

In fact, it is worth mentioning that literally feeding by hand (with your hands) is a bad idea. Eels have big sharp teeth, a great sense of smell and bad eyes–which should hopefully remind you a bit of the Big Bad Wolf–and you know how that story goes.

You also don’t want your snowflake eel to come out looking for a meal the next time you reach in the tank to adjust the live rock or place a coral frag.

If your eel won’t eat the seafood kabobs you send its way, you may need to supplement with some live ghost shrimp to keep him healthy while learning to accept less exciting looking food.

Keeping them well-fed is an important factor in keeping them from eating their tank mates.

Feed them enough to be full (a trained and hungry eel will re-emerge from their rockwork looking for more to eat) 2-3 times a week.

It is probably healthy for them to get a break from such frequent, perfectly timed, heavy feedings, but you also want to weigh that with the risks that a hungry eel might improvise a bit more than you would hope for.

Maintenance and clean up crew

Regardless of what you feed them, they will be messy eaters, which means there will be scraps of food lying around, polluting your tank. This can make it challenging to keep them with the most sensitive SPS coral species. You might also want to have a few scavengers in the tank, and you will want to stay on top of maintenance by removing any noticeable chunks of leftover foods.

In the wild snowflake eels can grow to upwards of 3 feet, but in captivity tend to top out at just over 2 feet. Because of their size, they shouldn’t be placed in a tank less than 50 gallons in capacity. They, like most eels, are adept at the art of escape. Tank lids need to be well fitting, and all small gaps need to be covered.

The majority of snowflake eel deaths in the home tank are a direct result of their escape, either out of the tank and on to the floor, or through a pipe and into a filter or sump.  However, it is important to keep in mind that a snowflake eel can survive for up to twelve hours out of the water. An eel found outside of the tank should be promptly returned to the water. It is possible that they will survive their ordeal and make a full recovery. 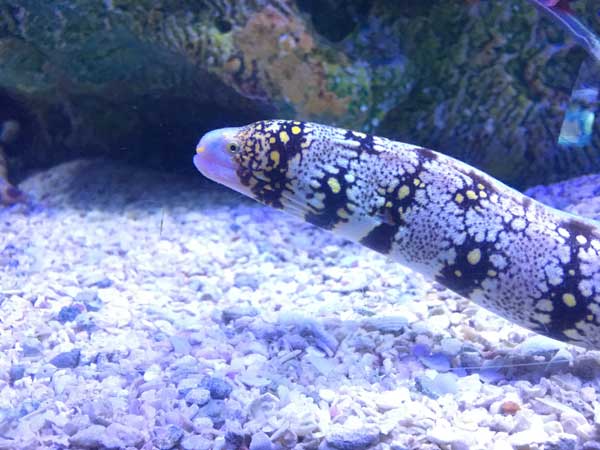 Snowflake eels do not have scales, rather they produce a mucus that covers their bodies and offers them protection. Their lack of scales makes them very sensitive to changes in water chemistry and also to the chemicals intentionally added to the tank for treatment of infections and parasites.

Their messy eating habits also require special consideration with regard to tank cleanliness. A good filtration system is a must, with a large protein skimmer. Frequent water changes and keeping on top of salinity and PH are necessary for keeping these thin-skinned fish in good health.

Doesn’t the word Eel look funny with the first letter capitalized? I think so, too.

In their natural habitat, eels spend most of their time hiding in rocks and only popping out to eat. They need at least one suitably sized nook in the live rock to be a happy eel, although creating enough of an aquascape that they can move along the entire tank unseen is ideal (for them).

They also like to burrow in the sand. A thick (2 to 3 inch) layer of sand at the bottom of the tank will make them feel more at ease. Because of their size and musculature, it is important to secure rocks and other fixtures to keep them from toppling over.

Our frosty eel friends are generally thought to be reef compatible, with a few very important, notable, and loudly disclaimed exceptions. They will not purposefully damage or eat coral, but they are fairly large and very muscular and ambush predators, so a quick jolt out of their hiding spot could dislodge and break anything they are near.

They also dine mostly on crustaceans. So, shrimp, crabs, and clams should be considered unsafe to keep with them.

There are a bunch of aquarium owners that break that rule and keep Echidna nebulosa with cleaner shrimps without issue, but there are also plenty of reports of opportunistic hunting that has happened too.

Snowflake eels have terrible eyesight and hunt primarily by smell and sensing motion. If it moves and smells like meat, and if they are hungry enough, they will at least try to eat it. While they often release whatever they’ve grabbed after they realize it’s not the food they want, their strong jaws and conical teeth can inflict a lot of damage. Small fish are best spared from a crushing death, by just not putting them in the same tank.

Thankfully there are a lot of fishes that make great companions for snowflake eels. Options for tanks mates include lionfish, tangs, triggerfish, and wrasses. Large fish that are equally aggressive are ideal.

Snowflake eels can also be kept carefully with other eels. Two snowflakes can get along if the tank is sufficiently big (they need their own hiding places) and they are similar in size (eels are known to be cannibalistic).

It is also important that they are introduced at the same time. Because they are some of the smallest eels, keeping them with larger eels can pose a risk to them. 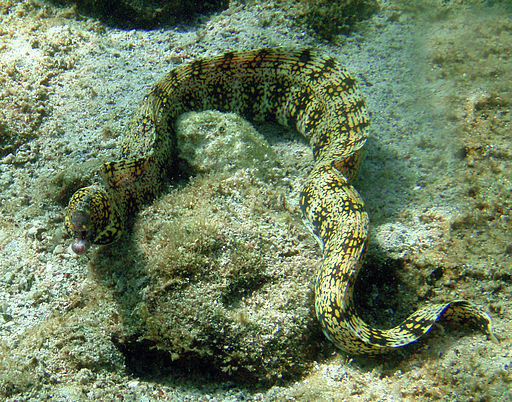 Eel reproduction is tricky business. Morays don’t have any defining sex traits, males and females look identical, making it impossible to know if you have a breeding pair. They are also capable of changing sex (protogynous). The dominant feel in a group will become male for the purpose of breeding.  The fact that a dominant female is required means that there is going to be some fighting to establish a pecking order.

Also, this change can take up to a year to happen and is not guaranteed even in a tank with multiple eels. Add in the trouble of keeping more than one snowflake eel in a tank and it can get complicated, fast. A lot of breeding is spent just hoping an obvious pair will appear in your tank. Even once you have a pair there is no easy way to make them breed and they are very reluctant to do so in captivity.

The guiding advice if you are determined to breed eels seems to be put a couple in your tank and then forget about the matter entirely. You might end up with fertilized eel eggs, but more than likely you won’t. 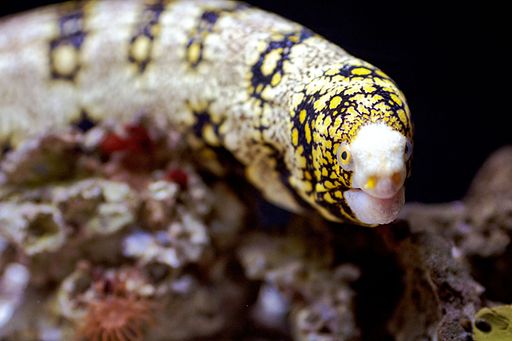 Their yellow “nose noodles”, gaping jaws and eyes give them a slightly goofy expression. The “noodles” are something that is called in-current nostrils, by almost no-one in particular on a given day. That’s really just a fancy, scientific way of saying, they are believed to help direct water into their noses so that they are able to better smell their prey.

Those infamous nose noodles may also help give them a “directional” sense of smell which will allow them to hunt better with their limited eyesight, but they really do look like macaroni noodles sticking out of their faces.

Snowflake eels are one of the easiest species of eel to keep in captivity. They have a laid-back temperament and can get along with a large number of fish species, considering their carnivorous diet.

These eels have poor eyesight and hunt by scent, they need lots of rocks and crevices to hide in and are nocturnal. Their daytime shyness and camouflage markings will make them the “Waldo” of your tank unless they are hungry and there is food available, then you are definitely in for a surprise.

While breeding your snowflake eel in an aquarium setting is likely to work out, there are a lot of things to recommend this uniquely colored species of Moray.

They are good-natured by eel standards getting along in a tank with any creature larger than its jaws. 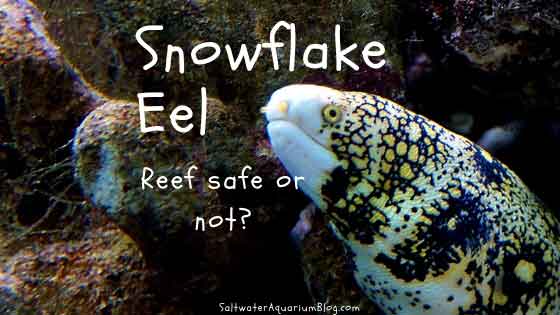 They will eat a wide variety of food.

Despite their large size, since they are relatively site attached (and don’t swim around that much in the open water), they don’t need large tanks.

What they do need, perhaps most of all, is a tank with a tight-fitting lid, or else they may end up in your sump, or even worse, on the floor, which would certainly entertain your cat. But it would not do wonders for your fish.

What do you think?

What do you think? What is your reaction to this article or the videos? Do you have experience keeping them? If so, please leave a comment below.