Have you ever seen such a thing? Does anyone know if they are actually real? 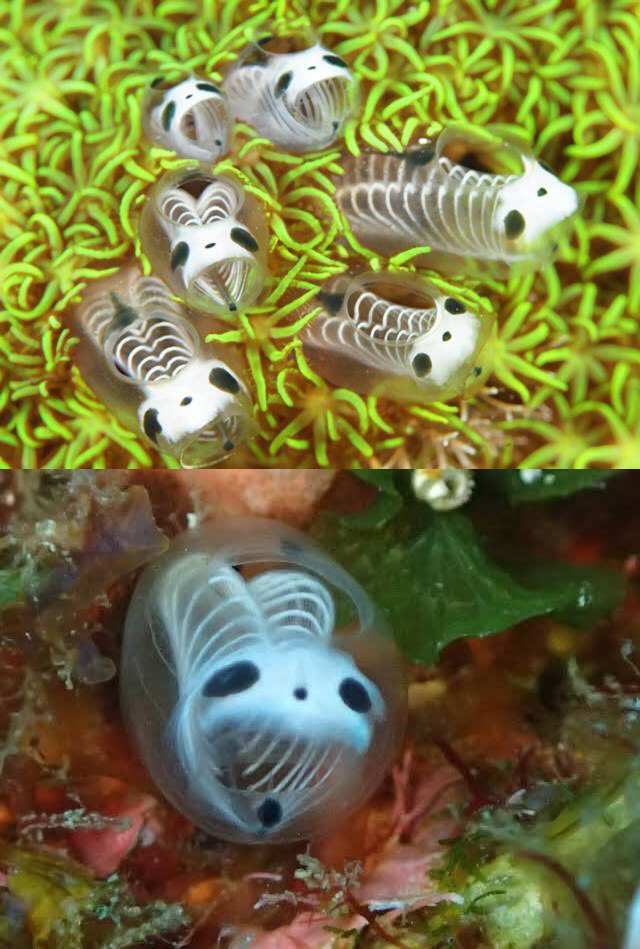 These are Skeleton Panda Sea Squirts, also known as Ascidians (as they’re in the class. If they ARE real, then, like all sea squirts, they are sessile, meaning that as adults, one end of the body is always firmly fixed to rock, coral, or some similar solid surface. The upper surface of the animal, opposite to the part gripping the substratum, has two openings, or siphons. When removed from the water, the animal often violently expels water from these siphons, hence the common name of “sea squirt”.

Almost all ascidians are hermaphrodites. The gonads are located in the abdomen or postabdomen, and include one testis and one ovary, each of which opens via a duct into the cloaca. Broadly speaking, the ascidians can be divided into species which exist as independent animals (the solitary ascidians) and those which are interdependent (the colonial ascidians). Different species of ascidians can have markedly different reproductive strategies, with colonial forms having mixed modes of reproduction.

Over the last few hundred years, most of the world’s harbors have been invaded by non-native sea squirts that have clung to ship hulls or to introduced organisms such as oysters and seaweed. Several factors, including quick attainment of sexual maturity, tolerance of a wide range of environments, and a lack of predators, allow sea squirt populations to grow rapidly. Unwanted populations on docks, ship hulls, and farmed shellfish cause significant economic problems, and sea squirt invasions have disrupted the ecosystem of several natural sub-tidal areas by smothering native animal species.

Sea squirts are the natural prey of many animals, including nudibranchs, flatworms, molluscs, rock crabs, sea stars, fish, birds, and sea otters. They are also eaten by humans in many parts of the world, including Japan, Korea, Chile, and Europe (where they are sold under the name “sea violet”). As chemical defenses, many sea squirts intake and maintain an extremely high concentration of vanadium in the blood, have a very low pH of the tunic due to acid in easily ruptured bladder cells, and (or) produce secondary metabolites harmful to predators and invaders.[14] Some of these metabolites are toxic to cells and are of potential use in pharmaceuticals.