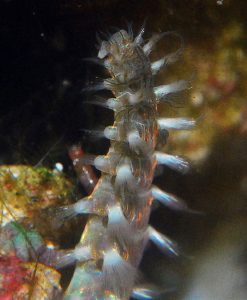 Did you find a bristleworm in your aquarium? Don’t panic. They are scavengers of meaty foods, but common aquarium bristleworms do not prey on living animals or corals. They perform a necessary function in most aquariums, eating leftover foods and decaying matter.

Most aquarium bristleworms are small. You may only see the first few inches of a worm because they hide most of their bodies in holes in the rocks and can grow up to a foot or two in length. They’re pink, brown, grey, tan, and may be iridescent. You’ll typically notice them at night with a flashlight, during feeding time, or when you’re moving rocks. Tufts of bristles run along both sides of the body and feel like irritating fiberglass shards when stuck in your finger. Try duct tape or cover the area in glue then pull it off; the bristles should come out with it. This is a good reason to wear gloves when working in your aquarium. 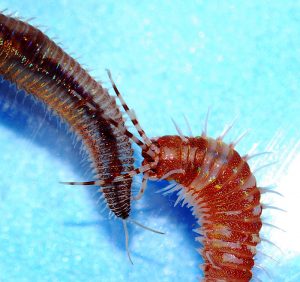 Fireworms are a venomous type of bristleworm. It’s unlikely you’ll have an allergic reaction from the painful sting, but soaking in hot water and taking benadryl may help. Fireworms can be identified by a prominent caruncle between the eyes. All but one species are peaceful scavengers; Hermodice carunculata is a coral predator.
Eunicids are another type of polychaete worm. They can be identified by five short tentacles around the mouth. They lack bristles and are thicker and larger than bristleworms. Very large specimens are not common in captive reefs, but some of the largest Eunicids ever found in home aquariums were over 10 feet long. Most are harmless scavengers, but some species are known to prey on small fish.

When should you remove bristleworms?

If you have a predatory Eunicid or fireworm, too many bristleworms, or sensitive livestock like seahorses which can be injured when they consume bristleworms, you may need to remove them. If your tank has bristleworms as far as the eye can see, you’re likely overfeeding or you have a dead, decaying body in the tank somewhere. Address that issue first. 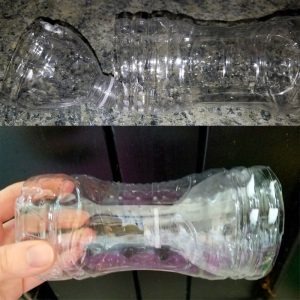 Instant trap. Cut the top off a bottle, add bait, and insert the top spout first into the bottle

You can find bristleworm traps at your LFS, or you can fashion one out of a soda bottle or a pair of nylons. Use a sturdy bait like krill. Set the trap each day just before dark and empty it in the morning. Do this every evening until you have removed the excess worms.

There are also many species of fish and inverts that consume bristleworms. Bristleworms are easier to control in FOWLR tanks because many typical FOWLR fish like puffers, triggers, and large, aggressive wrasses like Formosa and banana wrasses eat them.

I’m an aquarist with interests in Syngnathids, aquatic medicine, coldwater aquariums, corals, taxonomy, aquaculture, fish breeding, and nano reefs. I started my career in the aquatics department at a big box chain pet store in the early 2000’s. I’ve worked in aquaculture, online aquarium retail, aquarium photography, wholesale, aquarium maintenance, marine fish purchasing, and managing local fish stores. In addition to articles on reefs.com, I have many photos and articles published in pulp mags and on other websites.