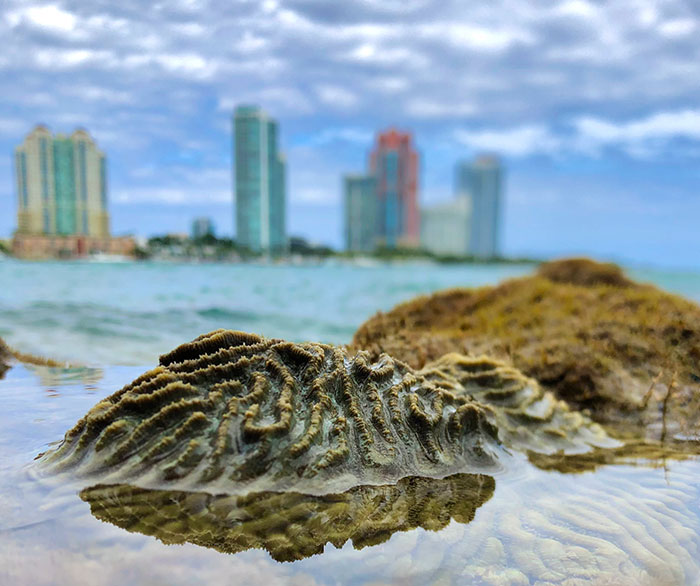 For more than a decade, Coral Morphologic has sought to shine a spotlight on Miami’s intertidal urban corals and their potential scientific value. These surprisingly resilient corals appear to avoid bleaching and stem disease better than their conspecifics offshore on the natural reefs. Over the past two years we have been working with scientists at NOAA to explain these differences using molecular lab analysis of tissue samples collected in the field.

That work finally culminated in ‘Molecular Mechanisms of Coral Persistence Within Highly Urbanized Locations in the Port of Miami, Florida‘ published in the research journal Frontiers in Marine Science. We found that the Symmetrical Brain Corals (Pseuododiploria strigosa) living in the urban environment (specifically alongside MacArthur Causeway and Star Island in Miami) were predominantly colonized by the Durusdinium sp. strain of symbiotic algae (zooxanthellae) that provides the coral with photosynthetic energy during daylight hours. Durusdinium is known to be a heat-tolerant genus of zooxanthellae, and has long been investigated by scientists seeking to create bleaching-resistant ‘super corals’. However, until this study, the Symmetrical Brain Coral had rarely been observed hosting this species of zooxanthellae elsewhere in the region, making these observations here in Miami quite remarkable. Beyond the helpful symbionts, the Symmetrical Brain Corals living in the urban environment were also found to be producing proteins and enzymes known to identify and digest pathogenic invaders. These proteins could be a two-fold benefit to the coral since disease-causing microbes can be digested as food before they can infect the coral. The urban marine environments around Miami often have high concentrations of phytoplankton and turbidity in the water, along with high bacterial concentrations that frequently require ‘no swim’ public health advisories. The ability to capture and extract more energy from food could enhance its health and provide sustenance during times of bleaching. These findings from a single species of urban coral in Miami’s coastal environment suggest further investigation is warranted in the variety of other reef-building species that have self-recruited to the City’s concrete and riprap shorelines.

It also demonstrates how the human-made hydrogeologic conditions around PortMiami serves as an evolutionary gauntlet selecting for corals better adapted for life in the Anthropocene.

You can follow any responses to this entry through the RSS 2.0 feed. Responses are currently closed, but you can trackback from your own site.