Harlequin Shrimp, in my opinion, are one of the most beautiful marine invertebrates in the world. Just take a look. They are mostly white with colorful spots all over their mantis shaped body. In generaly, they grow to a maximum size of 2 inches. Females will be significantly larger than the males. The three most common reasons aquarium owners consider purchasing them are:

Hymenocera picta is the scientific name of the harlequin shrimp. Be sure to remember that, in case it comes up the next time you play Quizzo.

Harlequin shrimp are found on the rubble piles outside of coral reefs from Hawaii to the Indo-Pacific region. There are regional color differences with the Indo-Pacific specimens having white bodies with maroon to purple spots with blue outlines, while the Hawaiian variant has a white to cream colored body with bright pink to magenta colored spots.

In their natural habitat shrimp form breeding pairs who rarely move more than a few inches away from each other. Their pairing is thought to be both for the purposes of mating and for the added benefit of having a hunting partner–which is bad news if you’re a starfish. 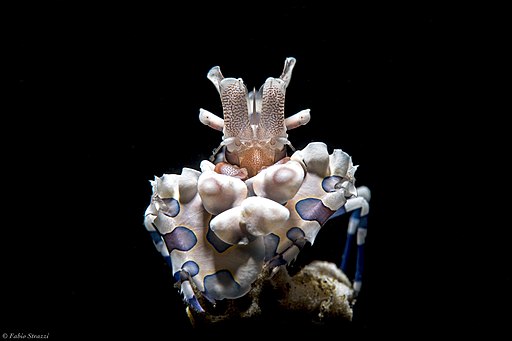 Placement in the tank

These shrimp tend to be shy at first and need a safe place to hide. Often times they will pick a cave and turn that into their lair, they use this for resting and for eating, dragging their prey into it to be able to eat in safety.

They need water temperatures between 72 and 84 degrees Fahrenheit and are very susceptible to changes in water chemistry and salinity. Water changes need to match both chemically and in temperature. They can not handle copper or nitrates in the water (chemicals commonly used to treat parasite infestations in fish).

The shrimp are also vulnerable to strong currents and will shy away if your tank has too much flow.

A quick scan of forum posts discussing these colorful crustaceans show numbers of posts from people who lost their fish to their powerhead filters. Finding circulation and filtration systems that don’t create too much current in the tank is an absolute must for keeping harlequins happy and healthy.

A gyre pump may be best for these shrimp if you intend to keep them in a larger reef tank.

However, because of their size and delicate structure, you may want to try keeping them in a nano tank, where they can be more secure (and therefore visible) and be the main focus.

Hymenocera picta, like all shrimp, shed their exoskeletons as they grow, because their hard outer shell doesn’t grow with them.

As they grow, a new shell develops under the old one.

When it’s ready to grow, their old shell splits open and they emerge in their new shell.

Occasionally an old shell will come off in such a perfect piece that it will appear like the shrimp is dead and lying motionless on the bottom of the tank.

The problem is often made worse by the fact that a freshly molted shrimp knows that its new exoskeleton is still soft and vulnerable to predators and will hide for a few hours until it hardens. So don’t jump to conclusions too quickly, if you find a lifeless carapace in your tank.

Hymenocera picta can be kept with smaller fish and many kinds of crabs. Other shrimp can be an issue, though, as all shrimp tend to be territorial.

Harlequin shrimp do not have a lot of natural predators in the wild.

In a tank setting, however, they are likely to be picked on by any fish that eats shrimp.

Wrasses, in particular, can be a problem, but any large fish can pose a potential threat. Even if the larger fish won’t eat the shrimp, the threat from predators can keep them in hiding. It goes without saying (although I guess I am saying) that it is not wise to keep this shrimp with fish that are known to eat shrimp, like dwarf lionfish or hawkfish.

Since their natural food is starfish (more on that in a bit), don’t keep them with any decorative starfish or sea urchins that you don’t want to see eaten.

Harlequin shrimp prefer to live in breeding pairs and will spawn every month or so.

Raising them from their larval stage in a home tank has been met with limited success. However, just last year a commercial aquarium company was able to get 500 harlequins from larval to adulthood. Hopefully, there will be more success and a methodology for home propagation will be available soon. 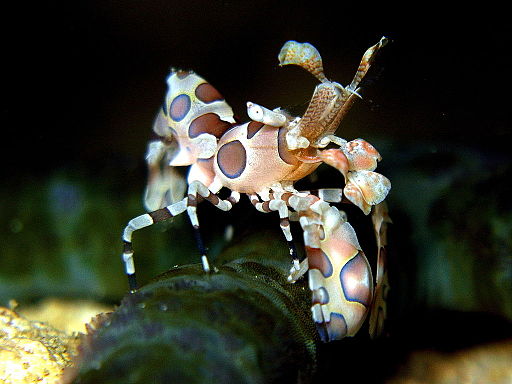 Harlequin shrimp only eat starfish (and in times of absolute desperation, sea urchin). Specifically the tube feet of starfish. There is no alternative food source you can easily entice them with. A pair of harlequins goes on the hunt for starfish, able to smell their prey, even if the echinoderm is hidden.

Once they find a starfish, they will stand on top of it to immobilize it before flipping it over. As soon as the starfish is on its back the pair will begin to drag it to their lair for feasting upon.

A single harlequin shrimp can make a starfish last up to two weeks. Generally speaking, they start eating at the point of the star and work their way through the tube feet toward the center.

Some hobbyists have reported that their harlequins will even bring algae into their cave to force-feed the starfish in order to keep it alive and fresh for their dining.

Some species of starfish have the ability to shed their legs to get away from predators and will do this when being eaten by the shrimp.

Because of their very particular tastes, harlequin shrimp can be quite expensive to keep. Chocolate chip starfish are some of the lowest cost options and even those come in at $9-$12 each.

Preventing them from starving

Since these shrimp have voracious appetites and will only eat starfish, you probably need a plan to ensure you will always have food available. Here are a few thoughts (all with their own level of reasonability and humaneness): 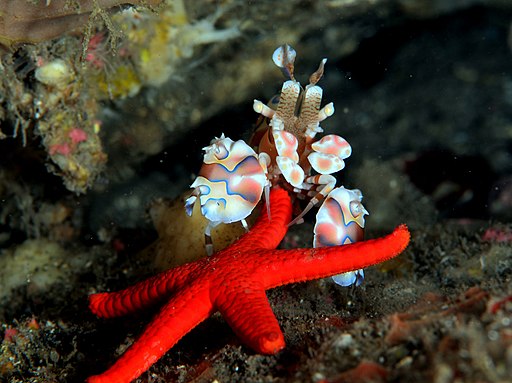 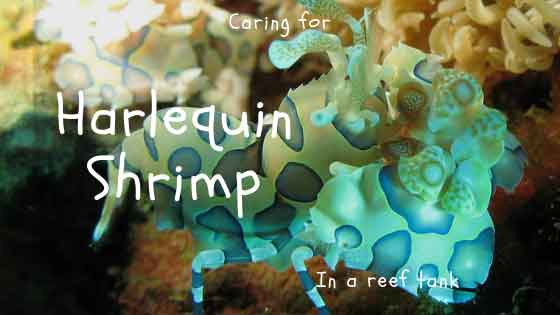 Harlequin shrimp are gorgeous. It is amazing to watch their hunting behavior and how adeptly they are able to disarm (pun intended) an unexpected starfish, but raising them in a reef tank certainly comes with a lot of challenges.

Their dietary needs aren’t for the feint of heart (or those on a budget). Regardless of how starfish, be ready to be on clean-up duty. Harlequin shrimp eat starfish feet.

They won’t eat the whole starfish.

So the rest of the body will be left in your tank…to rot. Ugh.

Most clean up crews won’t eat the outer bits of the stars meaning that regularly removing decaying starfish from the tank is a chore that accompanies harlequin shrimp ownership.

What do you think? Would you consider keeping one? Share your thoughts below: