The Bird’s nest Coral is a Small Polyp Stony coral (shortened to “SPS” by many aquarium owners) with thin yellow, purple or pink branches that grow into a densely intertwined mass resembling the nest of a bird.

As far as SPS corals go, the bird’s nest coral is one of the easiest, but that doesn’t mean this species is suitable to the uninitiated reef tank. Caring for any coral, especially an SPS coral is a moderately difficult endeavor that is best left for those of you who have achieved a modest personal level of reef aquarium success.

If you can meet its water quality and lighting requirements, a small frag or broken branch may be all you need to grow a nice-sized colony in your reef tank.

The scientific name for the Birds Nest Coral is Seriatopora hystrix. It is also more sometimes called the Purple Bird’s Nest Coral, Finger Coral, Needle Coral, and Brush Coral, depending on what part of the world you herald from. In case you’re a big fan of taxonomy(and who isn’t?) or have taxonomist friends, you’ll be delighted to know that this coral belongs to the Pocilliporidae family, which also contains pocillopora and stylophora corals, which are also cared for in the hobby. 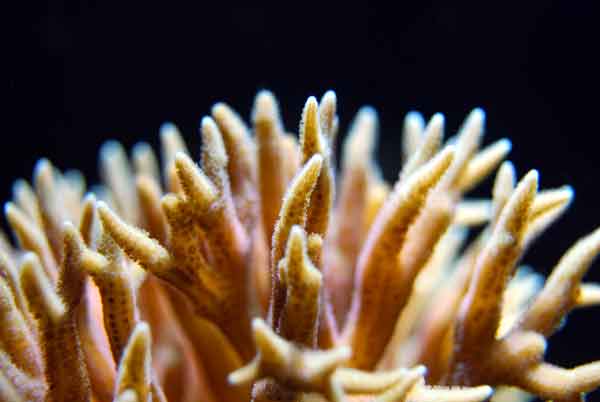 The Bird’s Nest Coral and other members of the Seriatopora genus have an extensive natural habitat. They are found along the expansive east coast of Africa, the Mauritius Islands, Madagascar, the Red Sea, the Cocos Island Ridge, to Australia’s west coast in the Houtman Abrolhos Islands, the northern Australian coast, and the Australian east coast in the Lord Howe Islands.

Often found in shallow reefs and upper reef slopes at depths between 20 to 115 feet (6-25 m) throughout the range of the genus.

In the wild, Bird’s nest corals have a communalistic relationship with crabs such as the female of the gall-forming Hapalocarcinus marsupialis crab. This crab plays a major role in the coral’s growth pattern as the female crab shapes the growth of its thin branches to create a cage where it lives permanently but which has enough space to allow the smaller male crab to enter and mate with the female.

In this way, the female crab lives its entire life in the branches of the Bird’s Nest Coral. However, it may not be expedient to introduce these crabs in captivity.

Placement in the Tank

For best results, keep the Bird’s Nest Coral in a mature reef tank that is at least 6 months old–1.5 years old, if you can muster the patience.

Bright light produces the fastest growth, but the coral might not do well with intense light if it was living at lower depths in nature. The genetic makeup of the coral may also affect its lighting requirements.

For instance, the Yellow Bird’s Nest does well in extremely low lighting conditions, but the pink variety will suffer if it does not receive intense lighting. You need to get the lighting right if you want this coral to thrive, or you will be left with a sick and bleached coral regardless of all the care and nurturing in the world.

A best practice is to gradually acclimate your new specimen to the light in your tank by decreasing the light intensity to about 50% and increase it moderately over time to the desired intensity.

While the Bird’s Nest Coral can tolerate other corals, it is important that it does not touch other corals, which is really a best practice for all coral species (although some Euphyllia corals can touch without problems). But if your corals are even close to touching one another, you’re probably doing it wrong. No offense. 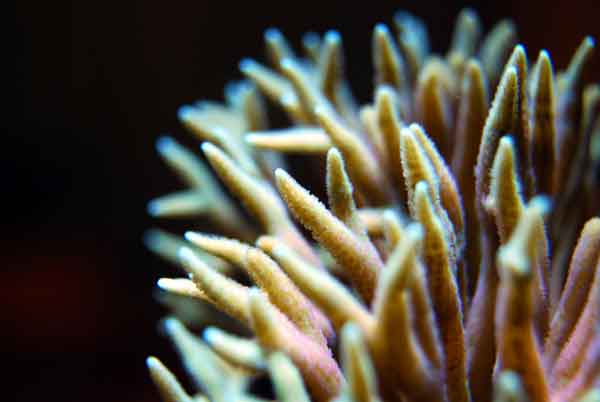 One thing that requires significant self-restraint, in this hobby, is to place your corals far enough apart to allow them to grow to a reasonable colony size without encroaching too much on neighboring corals. Try to think a few years in advance when placing your corals to allow adequate room to grow.

They require relatively standard reef tank water parameters. Water temperature should be about 78° – 82° F. Salinity should be about 1.23 to 1.025. They thrive in moderate to turbulent water movement, depending on the strength of the current in their natural habitat, but they can manage most types of flow.

In most cases, the ideal location for Bird’s Nest Corals near the top of the aquarium, where they will get intense light.

The Bird’s Nest Coral is not an overly aggressive coral, so you don’t have to worry much about it leaking toxins to kill its neighbors or stinging sweeper tentacles. It is fairly fast-growing, by SPS coral standards, so the most important thing is to give plenty of room for it and its neighbors to grow.

The coral is arborescent, i.e., they develop branches like trees. The growth of the branches depends on the strength and direction of the water flow, and the stronger the current, the thicker the branches. It grows to become a twisted bunch of branches that fuse at certain points. The branches can be blunt or needle-like and grow up to 1-1.5 feet.

Bird’s Nest Corals can have a variety of colors including brown, orange, pink, green, yellow, purple, and combinations of these colors. If the corals were collected at greater depths, they tend to have thinner stalks.

The Bird’s Nest Coral can reproduce sexually and asexually, although sexual reproduction for any coral is rare in captivity. On the other hand, the corals can also reproduce asexually by fragmentation and breakage, which is something S. hystrix excels at because the thin branches break easily when bumped into or moved around the tank.

You can propagate your Bird’s Nest coral by fragmentation. Look for a healthy coral and cut off a branch of about 2″ length. Glue the frag to a rock o reef plug, making sure it is glued on its side to promote faster growth and provide plenty of water flow.

If you want to learn more about fragging and coral reproduction, you can learn more here.

Bird’s Nest Coral can survive on its own without feeding as the zooxanthellae algae that live inside it will provide nourishment from photosynthesis. But corals are animals, and all animals need to eat.

Extended polyps from a healthy specimen will capture and remove appropriately sized food particles, like plankton. For best results, start by GENTLY shooting a small amount of food in the direction of your coral. A lot of times, this will initiate a feeding response–meaning that the coral will extend its polyps in search of a meal.

Then, turn off the water flow pumps (many pumps, like the newer gyre models, have a feeding button that will pause the water flow for 10 minutes to allow for feeding) and target feed them using a turkey baster, syringe or Julian’s thing.

The Bird’s Nest Coral is sometimes considered to be a gateway SPS coral. It is the coral most commonly turned to first when an aquarium owner wants to try growing SPS in their tank.

Even though it’s one of the least demanding SPS corals, it still requires an intermediate level of care to be successful.

Easily grown from a small broken branch or frag, this coral will tolerate some very minor fluctuations in water parameters and can be a hardy, fast-growing species.

If you take the time to carefully transport, gently acclimate, provide sufficient lighting, maintain solid water quality and feed this amazing creature, you’ll be amazed to see how quickly the thin branches grow and fill in space in your tank. 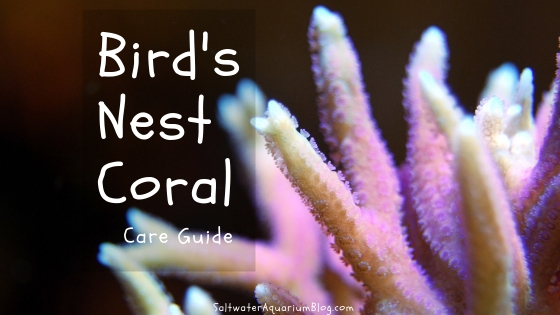 What has your experience been?

Have you tried to keep Seriatopora hystrix? If so, please share your experiences with a comment below. What advice would you give?