It wasn’t too long ago in our hobby that aquascaping was little more than just piling rocks on top of each other. While it served its purpose as a place for fish to swim through, housing for beneficial bacteria, and a location for placing and growing corals, it was rather bland compared to its freshwater counterparts, where many people looked at freshwater’s scapes as artistic.

Over the years, things started to change on our side as well. I don’t know who started this movement exactly, but it is my belief that Marco Rocks was a large part of the revolution. By providing many different shapes of rocks, as well as different ways to put the rocks together with a cement-like product called Emarco, Marc Tetreault of Marco Rocks changed the game. He provided slab rocks for base rocks, which created a stable base that then encouraged other manufacturers to get creative, manufacturing and releasing different types of shelf rocks. Designs like tonga, plating shelves like those from Real Reef rocks, and arch rocks from Carribsea are bringing a new chapter to the world of aquascaping.

For first time this year, we presented Reef A Palooza / Afishionado award. Both Sanjay and I walked the floor and inspected all the booth and looked for our …

Marco Rocks won my Booth of the Year for Reef A Palooza Orlando 2017. Can you believe a rock booth winning the best booth award??
They brought in literally metric tons of their rocks to create a one of a kind booth. Even the tank stand was made out of rocks. How creative is that?

With that said, things that were being done with rocks in Asia were in just another dimension. Floating aquascapes were being made, and more and more artistic, bonsai-like, feng shui aquascapes were being produced. Something caught my eyes a few weeks ago and I wanted to share with you.  Without further ado, ladies and gentlemen, I present to you Godzilla scape.

Who was behind this masterpiece? I can already see encrusting corals, making this piece a center piece of any aquarium.  I reached out to the creative mind of the person behind this build.

Please introduce yourself to our viewers!

My name Hu Chih-Wei,  the owner of BlueBox aquarium Taiwan, Taichung City. We make a lot of marco rock aquascapes.

How did you came up with the idea?

Because I owned a LFS, I’m asked to aquascape for my customers about twice a week. We have an aquascape center and we have a lot of materials, and I made a lot of aquascapes using marco rocks. With making aquascapes so regularly, I was getting a little bit bored. So I thought, why can’t I make some aquascapes like no one has ever seen? 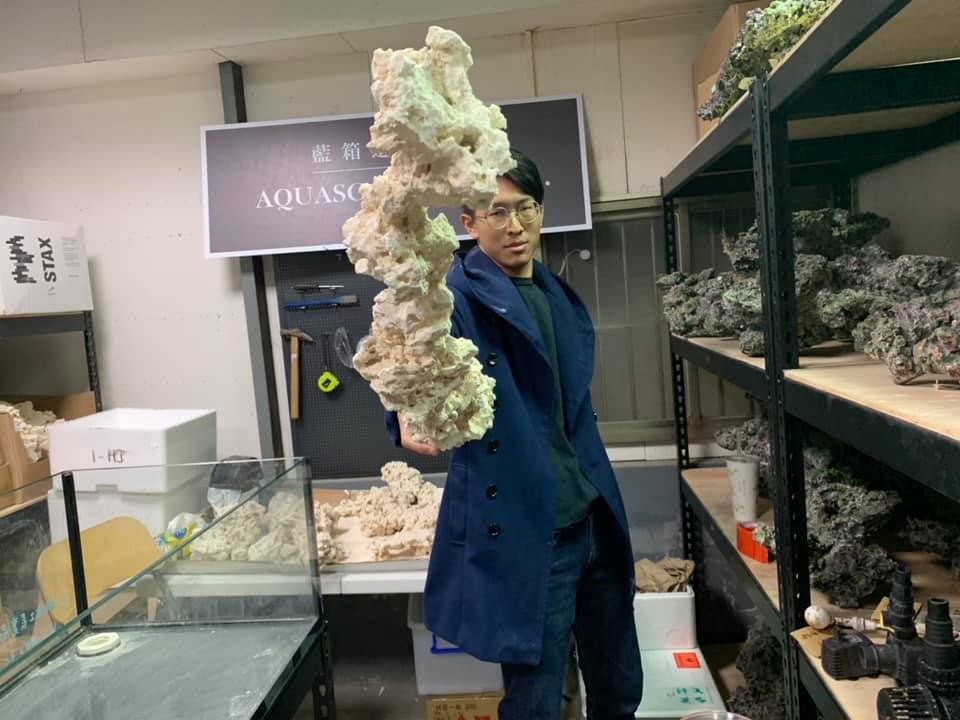 So I started to create some special aquascapes, such as Pretzel cookie shape, Ladder shape, Single arm floating aquascape…etc. After finishing these aquascapes, I felt that they were special, but not“UNIQUE”. I wanted to make something very cool that no one else has ever done before!

Then I thought about cartoons and animation, which led me to watch the Godzilla movie on Netflix. The skin of Godzilla and the outlook are very similar to the rocks! Then I decided to make one!!!

Godzilla!  Tell us more. Sizes, and what you used to make this happen.

We choose a round rock for the body, then we made legs, then hands, then tail, then head. We have a lot of details on the small parts. After finishing roughly, we made some fine parts, include hand claws, toes, back fin, and face. We used U shape parts for the hand claws and very small pieces of rock for the dragon’s scales.

The most important step is choosing the correct size and shape. We used a normal shape for the body, legs, and tail, and cut the Shelf rock into small pieces for the back fin.

The Godzilla was made between May and June. Whenever I had time, I would work on the project. Having finished the project, I don’t want to put it into water. Maybe a few months later I will (haha). If we will encrust corals, Cyphastrea(blue color red polyp type) on the back fin, and Montipora super man and forest fire on the body and tail are my favorite choices. And they can mimic Godzilla on fire!

Alright guys! Be sure to follow them on their facebook and other social media platforms to keep up with their latest innovations and inspirations with their aquascaping magic!

Meanwhile, I look forward to our shows coming back so I can arrange something like this for you guys again.

This is the first time that I’ve done this, and I was not properly prepared to shoot moving subjects, so I apologize in advance for any shaky moments. With …